We all encounter the number one mental problem around: over-trying. Within the quest of reaching a goal, trying too hard lessens the probability of reaching that goal. In golf, this phenomenon exists when we fixate too much on trying to make something happen using our conscious mind as opposed to trusting our skill set that resides in our subconscious. It also happens when we focus on an outcome instead of committing to the process of an action. Many times, being wrapped up in result is caused by letting the environment dictate our thoughts. Applied efforts differ between a push up competition and trying to fall asleep at night. Based on the goal at hand, there’s a sliding sweet spot pinpointing the perfect amount of exertion.

We have to work to define this amount for our athletes on the golf course, but for everyone we train, even our developmental kids who have not begun competition, the opportunity to over-try exists in all everyday situations. In other words, they have the capability to increase their golf capacity by making adjustments in other areas of their lives. Continuously interrupting a parent chatting with a colleague to get their attention, attaining an early lead in a putting challenge then becoming nervous about losing, thinking too much about answers for a test and then running out of time before being able to complete, crowding a significant other when they’ve asked for space, taking an extra trip to the buffet line – life is packed with opportunities to put too much effort in. Good news is, we can put solutions in place for all of these scenarios and experience success on a more consistent basis.

By first identifying past events of over-trying and imprinting corrections, self-awareness is built. As our capacity builds, we can then be more proactive and start responding proportionately when this mental tendency presents itself.  In regards to mastering this in golf, we attain to focus on process in place of result by committing to a set of practiced thoughts that occupy the conscious mind. Only then do we have a chance to let something happen and not over-try.

As some may know, we do things a little differently at our Academy. A few weeks ago, we sat down with our athletes to review their goals. Earlier this year, we had set goals based on the season as well as incremental goals (lowest putts per round, most up and downs in a round or multiple rounds, lowest putts in a round, same for fairways, etc.).

Most people set goals, and almost all would agree this is very important. It’s the managing of these goals we take to a different level with our students. If you don’t manage them on a regular basis a couple things can happen. 1. Over training. 2. Over trying. And both of these can occur in training as well as competing. In many cases, it’s these two reasons athletes don’t accomplish their goals.

At this particular classroom session, we had recently come back to training from a very long break. Our facilities had been closed down for several weeks due to massive flooding here in Texas.

We went around the table asking the players where they thought they stood in their process, committing to their plan and accomplishing their goals. All of them felt they were behind. You could hear the stress and anxiety in their voices. They almost sounded as if they were guilty of something.

But as we continued to go around the table, the conversation began to lighten. You see, they all realized no one was on track to accomplish their goals because of the crazy weather mother nature brought us. They shared this struggle.

I asked everyone to get out a clean piece of paper, and we then began to reset goals. We adjusted the actual goals as well as each player’s training plan to accomplish those goals, to the exact date.

You could see the smiles and pleasure they experienced during this “reset” session as they redefined their direction proportionate to their circumstances and allowed time frame.

They loved it so much!

Needless to say, we had some serious milestones as our shortened summer progressed. One of our students posted three consecutive personal bests in events. Most recently, she beat her previous low round by 7 shots with a 74. She was beaming!

Another student set a goal of qualifying for the Texas Match Play Championship and set a personal best two-day total. He then made it to the final eight, beating the #3 seed.

They both said resetting their goals took pressure off of them. It allowed them to keep their focus on the training and running their mental systems instead of being intimidated by their desired end results.

They both accomplished their goals, beating their projected time frame by four months. So you know what, it’s time for them to hit the reset button again. Gotta love that reset button. Sure comes in handy.

As a coach, parent, friend or spouse, we share information with one another. We do this for many reasons – to inform or educate, to create empathy, or sometimes to criticize. However, if the news does not resonate with the audience, what good is our communication? And how meaningful can our coaching/parenting/friendship/marriage be if our intentions are lost in translation?

For this reason, we ran through an exercise that gathered known information from our athletes then maximized and organized that content. We had our students list various golf skills and concepts, and they spent a few minutes writing down everything they knew on the topics. We heard definitions, applied examples and even questions. Kids and coaches filled in the information gaps, and after discussion, all athletes recorded their newly-found comprehensive knowledge.  As a result, our students gained a deeper understanding of how facets of our training relate to one another and why it all plays an important part in creating a more complete golfer.

Understanding the meaning behind our training components allows the kids to build their self-images. Beefing up this aspect of their performance makes it easier for them to commit to their game. As a result, athletes are able to make confident decisions in an area in which they are achieving more competency. One of our main goals as coaches is for this mindset and self-reliance to carry out in other areas of their lives, making even a cautious decision maker able to make small confident decisions outside his or her area of expertise. 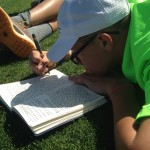 When we’re on the course, our thoughts waver and are dictated for most by the surrounding environment. Smells, situations, stresses from other areas of your life, sounds, outcomes, fears of failing, and more occupy our minds while training and playing.
There lies a great opportunity for growth in skill set by monitoring what we think about. The reason for this is because the conscious mind may only think about one thing at a time. Through the following exercise, our kids were taught the importance of policing where their attention is drawn and being able to redirect obstructive thoughts.
We had the kids list out 20 ideas that come to mind when they train with us or are out on the course.
“I’m tired.”
“I have so much homework to do”
“Is this an uphill or downhill putt?”
“I hit that great!”
“I smell BBQ.”
Then, we asked them to split the words evenly in five different groups. After that, we had them label each group after a golf skill set – for our developmental groups, we used Short Distance Putts, Long Distance Putts, Chipping, Full Swing and Mental Systems. From their four thoughts for each skill set, we had them come up with a cumulative imprint – were the sum of your thoughts good, great or do they need work?

From sharing our work with the group, we were able to laugh and also discuss the power of having a productive mindset while being around the game. This of course translates off the course as well, and lends itself to helping our kids have healthy and helpful thoughts in their everyday lives. 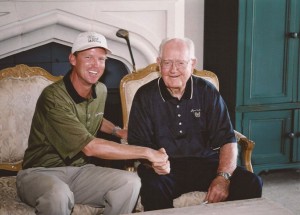 When I first began teaching golf, like any new teacher, I only taught beginners. I noticed that there wasn’t a step-by-step process for new-to-intermediate players to learn. Every other activity out there has some sort of standard process for teaching. So why didn’t golf?

In 1988, I began breaking the golf swing into steps and started teaching students my Two Step Process. I was working for Eldrige Miles at Gleneagles Country Club in Plano, Texas. He is the one who gave me my first pro job and taught me the club business. The years went on, and I refined and honed the Two Step process into a solid system for teaching the game of golf. When I was the director of instruction at Carmel Valley Ranch in the 90s, I could line up as many as 50 people and teach them the Two Step Process all at once. It would blow your mind the impact and results I was getting. It was so cool!

People would watch my clinics, scratch their heads and say, “I have never seen anything like this before in my life.” 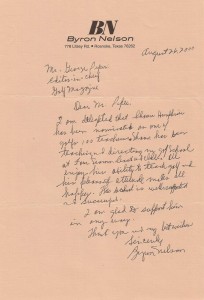 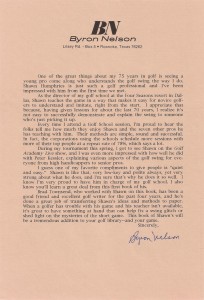 In 1998, I began working for Byron Nelson as the director of his golf schools. We would produce over 25 schools a year in a 6 month span. I introduced Byron to the Two Step Process, and he loved it so much that he wrote the forward to my best-selling book. Byron also wrote a recommendation letter for me to become a Golf Magazine Top 100 Teacher.

This is the same process I taught Troy Aikman and the legendary coach Bill Parcells. Troy liked it so much he wrote a second forward to the book. Bill endorsed the book as well with a nice quote on the back cover. I can’t tell you how thrilled I am to have these kinds of endorsements for such a simple process. It truly reassures me that I’m on the right track when it comes to teaching.

First Tee of The Palm Beaches

Get My Products & DVD’s